Today we often use Google when we want to learn something new, for example about education. The function of Google is similar to that of World’s fairs in the late 19th century. It provides a relatively comprehensive overview of things that might interest you.

One way of getting inspired from other countries education systems in the late 19th C was to take the train to Paris or Vienna, or even take the boat to USA and visit one of the large World’s fair’s education exhibits. There it was possible to meet an excessive collection of teaching materials, and even teaching methods. The things displayed at the World’s fairs were not really representative, but carefully selected (Lundahl & Lawn 2014). If we on the other hand turn to Google and ask what present education look like we get so many answers that it is almost impossible to sort among them. One way of overviewing them is by searching a topic with Google images. Pictures can often pinpoint dominant discourses (Fairclough 1992). One interesting question then, is what does the PISA test, or rather the discourse about it, look like.

Using Google images and the search terms “Pisa test” we retrieve a collage of pictures looking like this (March 20, 2015): 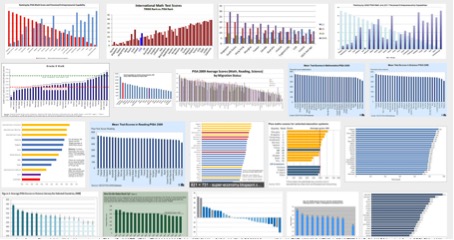 In this picture we see charts and tables illustrating comparisons on differences in outcome. We see that the people constructing these charts often want to illustrate that some outcomes are better then others – there is a slope in most of them. If we scroll among the Google images about PISA we see some variations where also the international foci becomes more prevailing (Pic 2), but we see very few examples of content, i.e. questions asked in these tests or information about test taking processes. 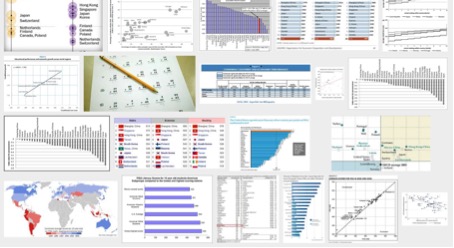 In a new Phd-theses Margareta Serder (2015) for example suggests, in an analysis based on PISA documents, that low performers appear as threats to the future society, due to the risk that they would become ineffective citizens. Meanwhile, other studies assert that standardized comparison is a practice that, when frequently repeated, contributes to lower results and an increasing disillusion of low achievers. Serder proposes that PISA, rather than to be seen as a knowledge measurement, should be regarded as a knowledge actor. In other words, PISA produces another reality than it measures – while measuring. Sweden is a good example of that. When Sweden started to drop in the PISA rankings 2006, Swedish politicians proclaimed an educational crisis, even if the scores still were quite decent. This paved the way for several reforms aiming at increased testing and control, which at least haven’t solved the problem with dropping PISA-results. Today PISA is synonymous to crises in Swedish educational discourse, which becomes evident when we search Google images for ‘Sverige’ (Sweden) and ‘PISA’ (Pic 3). 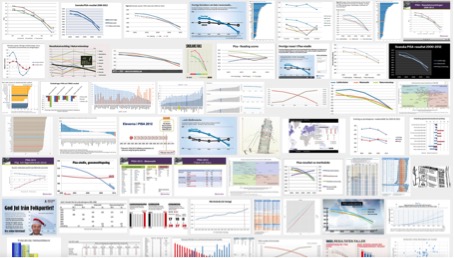 Compared to the international images of PISA this collage illustrates that PISA in Sweden is used to illustrate a negative trend when it comes to school quality – a downfall. Why Sweden fails in PISA and what to do about it is an interesting question, but based on these images we can also raise questions of another kind: what knowledge travels, where does it go and through what media. What shapes does knowledge about education have and when does it change its shapes and for what reason? Images like the ones in Pic 1 – 3 are the perfect “quick language” (Lundahl 2008). They transfer fast, and allows for translations without a spoken word. They can be correctly understood or misunderstood, it doesn’t really matter – they can become meaningful in new ways from the perspective of the spectators. If we consider PISA as a knowledge actor it produces images and idols through which it becomes an ontological reality that reach into space and time in a similar way as the old World’s fairs did. Clearly PISA fosters winners and loser. There is only room for a few top-performing countries. Also in the old World’s fairs competition was a major reason to participate. The spectators however met all of the variation and could with their own eyes and hands try to assess the quality of the exhibition. PISA is not really open to laymen assessment in that way. We see the differences in numbers, ranking and charts but what does it mean? What do the children really know or not? Visualised with the help of Google images one kind of PISA discourse is revealed, and regardless of its meaning, as purely a representation there is a kind of beauty in PISA.